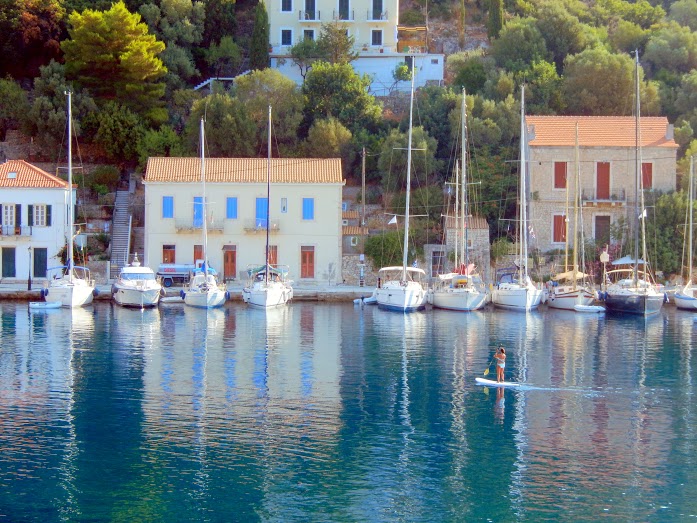 Read the next installment of Georgie Moon’s series on sailing in Greece. Picking up from where she last left off, take a look at this South Ionian sailing route from Kastos back to Lefkas. Stay tuned for more next week.

Continuing our sailing trip around the inland sea, we leave the island of Kastos behind and sail in a SW direction towards Ithaca, approximately 13 nautical miles away. After sailing for 7 miles, you will arrive at Atoko – a privately owned island with no inhabitants except for a visiting priest and shepherd to tend the goats.

Calm weather is needed if you want to anchor safely at one of the two bays – One House Bay on the east coast and Cliff Bay on the south coast. The former being the preferred option, as it shelters boats from the prevailing NW winds and has better access to the island via a pebbled beach and small flat hinterland.

Cliff Bay is deep and the sheer cliffs drop straight into the sea. The beautiful crystal clear turquoise water makes an excellent stop for lunch and a swim, if weather conditions are favourable. Depending on the weather, and your time scale, you could continue to sail SW to Ithaca. Head for Frikes on the north east coast, or Kioni, just two miles further south. The small village of Frikes is very pretty, with an an ancient windmill standing on the headland each side of the harbour.

Frikes has a small, typically Greek harbour, but the prevailing winds often make mooring here uncomfortable. Local fishermen suggested we move from the south quay to the harbour wall on the other side. Frikes is one of the few harbours in Greece where it is much preferable to lie side-to, if there are strong NW winds. Beware also of the big swell from large ferries using the Ithaca channel late at night which can make an uncomfortable berth.

Frikes is not as busy as Kioni, a major sailing destination for charter boats and flotillas. When you approach Kioni from the north, you will easily spot the three ruined windmills perched on the headland at the entrance to the bay. With its sheltered harbour backed by gently rolling hills, the picturesque setting of Kioni attracts large numbers of visitors each year.

When mooring, you often need to be creative in choosing your place. You may need to anchor off the rocks to the south and take long lines ashore if there is no room on the quay. Once you are safely berthed, there are many waterside tavernas to choose from where you can relax with a beer or an ouzo. You can take some lovely walks out of town and along the winding paths.

Much of the town was destroyed in the earthquake of 1953, but some impressive buildings still remain, and the views from the higher paths are stunning.After leaving picturesque Kioni, why not sail over to Fiskardo on the north-east tip of Kefalonia and soak up the atmosphere of another beautiful Greek harbour.

This is another very busy place, and you may prefer to find one of the quieter anchorages around Ithaca instead. However, Fiskardo is a beautiful place to visit, with numerous tavernas hugging the waterfront, and the little streets bursting with colourful boutiques and gift shops.

There are potentially lots of places to moor stern-to on the quay, but it can get very noisy in the evening with taverna visitors just at the end of your gangplank, but it can be great fun. A local ferry and numerous tourist boats arrive throughout the day, adding to the clamour. As an alternative you could anchor on the north side of the bay and take lines ashore. From here, there is a lovely walk through the trees to the old lighthouse on the headland.

North of Fiskardo, a sail of around 10 nautical miles will bring you to Lefkas island. You have the choice of either Vassiliki or Sivota for an overnight stop. Vassiliki on the south coast has an impressive beach, and is an important wind-surfing centre. The harbour is sheltered, and provisions are available in the little town. Some popular fish restaurants can be found around the harbour.

Sivota, further east, is another well sheltered bay, popular with flotillas who use this as their base. It is possible to anchor in the bay if there is no space on the quay.

There is a tiny town beach at one end, which you might have to share with a family of friendly ducks.

Heading north east from Sivota, you will pass Rouda bay with the tiny coastal village of Poros situated at the head of the bay. This is a great anchorage for a lunch stop, or to swim in the clear turquoise water, while admiring the steep wooded slopes above the village. Take the dinghy ashore and explore the narrow alleyways, and see the traditional Greek houses of Poros. After your relaxing lunch, sail north and enter the Meganisi channel with the island of Skorpios ahead of you.

Now you may rejoin your original sailing route towards Nidri. If you turn to port when you reach Nidri, you can explore the expanse of water known as Vliho Bay. This large shallow lagoon makes an excellent sheltered overnight anchorage. Take the dinghy ashore and enjoy an evening walk along the southern edge of the bay, stopping at one of the waterside tavernas for a drink or meal.

The inland sea of the Ionian is an easy sailing area, and safe in most weather conditions. There are numerous places to anchor, and many pretty harbours to visit. If you sail in this area of Greece you will certainly experience the friendliness and hospitality of the local people who will welcome you warmly to their beautiful country.

If you loved this post about South Ionian sailing, make sure to follow Georgie’s series on sailing in Greece.